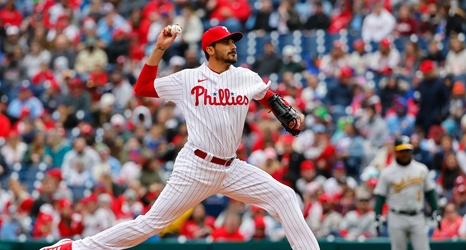 After two joyful games to start the season with plenty of hits, runs, and dingers the Phillies’ offense was non-existent in the series finale. The pitching was good enough to win holding Oakland to four runs while giving up nine hits. Zach Eflin started the game on the bump and was effective through four innings, allowing only two hits and striking out three.

The star-studded Phillies lineup could not seem to get anything going against A’s starter Daulton Jefferies. It took the 26-year-old righty only 48 pitches to carve through the Phillies in five scoreless innings.

Bailey Falter was the first arm out of the bullpen for the Phillies who was unable to keep the shutout intact as he gave up the first run of the game in the top of the sixth on an RBI single by Seth Brown.