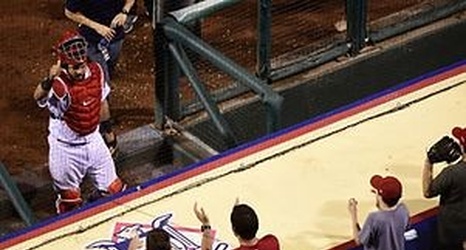 Catchers haven’t been developed in the Phillies organization since the days of Mike Lieberthal and Carlos Ruiz. Lou Marson, Cameron Rupp, Johnny Estrada, Sebastian Valle, Gabriel Lino, Tommy Joseph, the list goes on and on.

Looking to buck that trend in 2018 is the centerpiece of the Cole Hamels trade with Texas, Jorge Alfaro.

Making brief major league appearances in 2016 and 17 Alfaro has shown improvement at and behind the plate. In 29 games he hit an outstanding .318 with five home runs, but struck out 33 times to just three walks.

Because he’s been called up to the major leagues multiple times, Alfaro is out of minor league options and must start the 2018 season in the majors.