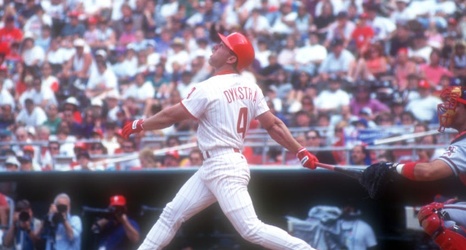 PHILADELPHIA, PA - JUNE 22: Lenny Dykstra #4 of the Philadelphia Phillies takes a swing during a baseball game against the Atlanta Braves on June 22, 1995 at Veterans Stadium in Philadelphia, Pennsylvania. (Photo by Mitchell Layton/Getty Images)

On this day in 1989, the Mets traded Lenny Dykstra, Roger McDowell, and Tom Edens to the Phillies in exchange for Juan Samuel.

Dykstra, who is quite the outspoken, avid Twitter user, commemorated the anniversary today: