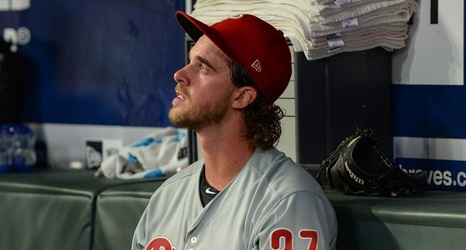 Aaron Nola struggled, Ronald Acuna Jr. and Austin Riley both homered, and the Philadelphia Phillies fell to the Atlanta Braves, 5-4. The Phillies fall to 78-73 on the season and temporarily sit three-and-a-half games behind the Chicago Cubs and Milwaukee Brewers for the second National League Wild Card spot.

Both Nola and Braves starter Mike Soroka both allowed just one baserunner in the first two innings, and it looked like there could be a pitcher’s duel between the aces of these division rivals.

The game didn’t stay scoreless for long, however.

In the bottom of the third, after Tyler Flowers reached on an infield single and Soroka got him to second on a sacrifice bunt, Acuna Jr.