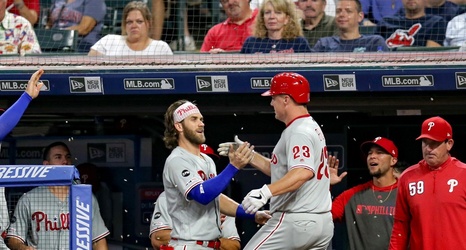 The Philadelphia Phillies (79-74) blasted four home runs, including two from Brad Miller and a three-run shot by Bryce Harper, to power past the Cleveland Indians (91-64) by a final of 9-4. They remain 5 games back of the final NL Wild Card spot with nine games to play.

For the second consecutive night, the Indians struck first. Francisco Lindor started it off by hitting a ground ball to short. Jean Segura, who had plenty of time to make the throw, did not get enough on the ball and Rhys Hoskins was unable to scoop it up at first.