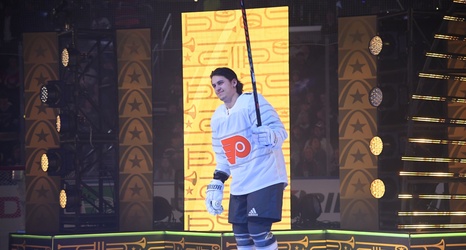 After finishing in seventh place in the Fastest Skater event at the Skills competition to kick off All-Star weekend on Friday night, Philadelphia Flyers winger Travis Konecny skated alongside other Metropolitan Division talent in a quest to earn one million dollars at the 2020 NHL All-Star Game. The Metro, which was Captained by Pittsburgh Penguins defenseman Kris Letang, got everything going by facing off with the Atlantic Division in a battle for Eastern Conference exhibition supremacy.

Though he couldn’t get his side the W, as the Metropolitan lost to the Atlantic by a score of 9-5, TK was apart of their most effective line offensively.