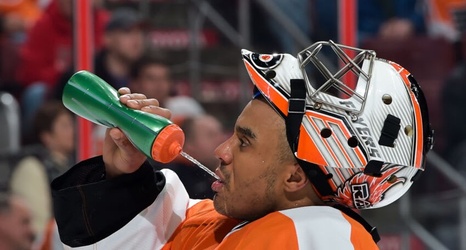 PHILADELPHIA, PA - JANUARY 20: Ray Emery #29 of the Philadelphia Flyers drinks water during the game against the Pittsburgh Penguins at the Wells Fargo Center on January 20, 2015 in Philadelphia, Pennsylvania. The Flyers won 3-2 in overtime. (Photo by Drew Hallowell/Getty Images)

Today marks the third anniversary of the passing of former Flyers goaltender Ray Emery, who tragically died in a swimming accident in Lake Ontario. He was 35 years old.

Emery spent his first five seasons in the NHL with the Ottawa Senators, most notably starting in net during their run to the 2007 Stanley Cup Final.