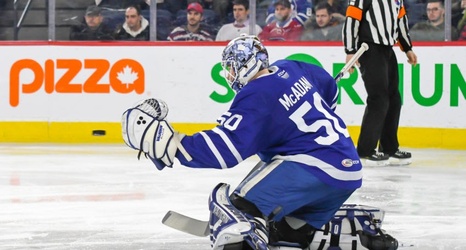 LAVAL, QC, CANADA - DECEMBER 21: Earmon McAdam #50 of the Toronto Marlies about to make a great glove save against the Laval Rockets at Place Bell on December 21, 2018 in Laval, Quebec. (Photo by Stephane Dube /Getty Images)

After officially adding Ryan Fitzgerald, Tanner MacMaster, and Zane McIntyre it appears that Phantoms general manager Brett Flahr isn’t done yet continuing to boost the roster ahead of the season.

With training camp set to begin and an announcement coming any day now, the Lehigh Valley Phantoms continue to shape up their roster by adding 26-year-old goaltender Eamon McAdam to Lehigh Valley’s roster on a standard player contract or otherwise known as SPC.