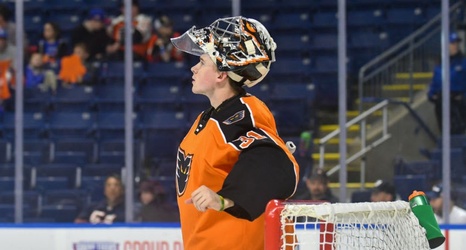 BRIDGEPORT, CT - OCTOBER 21: Goalie Carter Hart #31 of the Lehigh Valley Phantoms stands in front of the goal during a game against the Bridgeport Sound Tigers at the Webster Bank Arena on October 21, 2018 in Bridgeport, Connecticut. (Photo by Gregory Vasil/Getty Images)

The Lehigh Valley Phantoms begin their season and their quest at capturing the Calder Cup since the 2004-2005 season on February 6th where the Phantoms will head to the Giant Center in Hershey, Pennsylvania to begin the AHL season campaign.

Typically in a normal year, AHL teams will play 72 game regular season schedule but this year, Lehigh Valley will play a total of 38 games equalling out to 19 home and away games.