Joel Farabee To Represent The Flyers At NHLPA Rookie Showcase 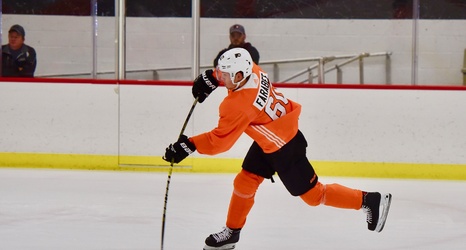 Following an outstanding performance at the 2019 World Junior Summer Showcase, Philadelphia Flyers forward prospect Joel Farabee will continue his eventful summer by participating in the NHLPA Rookie Showcase. The Rookie Showcase is an annual event in which some of the top prospects around the league take part in various on-ice activities. It gives trading card and sports memorabilia company Upper Deck an opportunity to take pictures and videos of the young players to use for their previously mentioned cards while utilizing the videos for digital posts. Carter Hart was the Flyers representative in 2018 and Oskar Lindblom and Philippe Myers took part in the festivities in 2017.