Flyers searching for consistency out of their fourth line 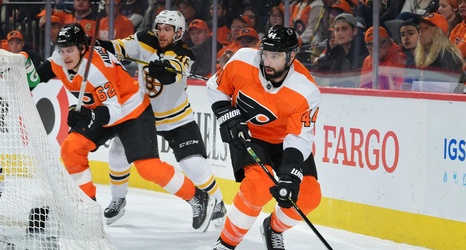 Pressed up tight against the NHL’s hard — well until the Stanley Cup playoffs anyways — salary cap, Flyers GM Chuck Fletcher went to the bargain bin to fill out his fourth line.

And while the returns on other bargain bin shopping items have been strong, with Derick Brassard and Keith Yandle providing surplus value on their minuscule contracts thus far, the same results haven’t been felt on a bargain fourth line that has struggled to find consistency through four games.

Nate Thompson was brought in to serve as either the fourth line center as a veteran presence or even a healthy scratch, but has stuck in the lineup with little other options available to coach in Alain Vigneault.