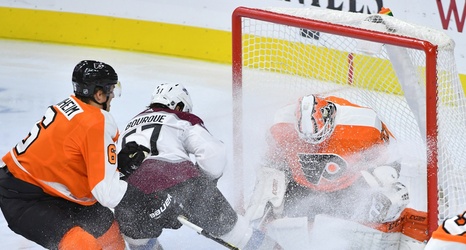 As the Flyers prepare to depart on a three-game Western Conference road trip, they started out Monday with bad news. I previously reported that Travis Konecny is out indefinitely with a concussion. Also, Phil Myers left the ice early with back spasms. Konecny is out and Myers is not expected to play on Wednesday night as the Flyers travel to Denver to take on the high-scoring Colorado Avalanche. Konecny will not travel with the team.

As the Flyers took to the ice in a split practice, the defense was first on the ice. All seven defensemen started out practice, however, Phil Myers left the ice early.