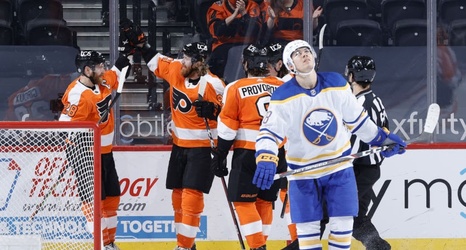 PHILADELPHIA, PENNSYLVANIA - MARCH 09: Claude Giroux #28 of the Philadelphia Flyers celebrates with teammates after scoring during the second period against the Buffalo Sabres at Wells Fargo Center on March 09, 2021 in Philadelphia, Pennsylvania. (Photo by Tim Nwachukwu/Getty Images)

After snapping a four game skid against the New York Rangers on Saturday, the Philadelphia Flyers head to KeyBank Arena to begin a four game trip against a team that can’t even spell its own name correctly; the Buffalo Sabres.

Although the Flyers have had a dreadful month of March, their struggles are nothing compared to Buffalo, which has set a new franchise record by losing a remarkable SEVENTEEN CONSECUTIVE GAMES; their last win coming against the New Jersey Devils on February 23rd.