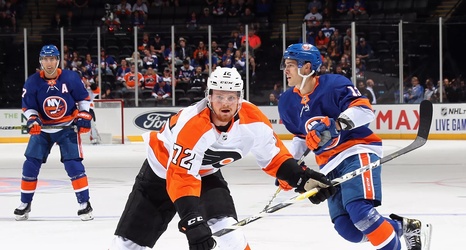 When the sun rose this morning, the expectation was largely that the Flyers would most likely wait a bit longer to pare their training camp roster down from the 54 names it entered the day with. But after this morning’s practice — complete with lines that, at the time, looked like they would be used in Saturday’s preseason game against the Rangers — Alain Vigneault, clearly a bit perturbed by his team’s unimpressive performance on Thursday night in a preseason loss to the Bruins, announced that nothing that had just happened mattered at all, and that some more of the focus of the preseason was going to shift towards getting the veterans on the roster ready to roll when the regular season hits.