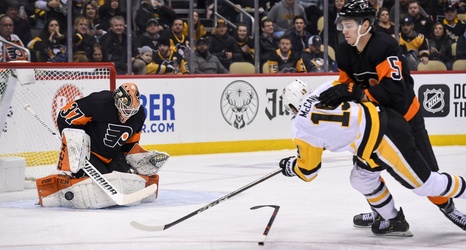 Aiming to stay hot after the All-Star break and extend their win streak to three games, the Philadelphia Flyers went to Pittsburgh to face the Penguins in the second half of a home-and-home series. Both teams were vying for another crucial two points as the Eastern Conference playoff race continues to be as close as ever, with the Flyers sitting one point out of a Wild Card spot and Pittsburgh ranking second in the Metro. Brian Elliott received the start in net for the Orange and Black, opposing Tristan Jarry on the opposite end of the rink.