Flyers: Carter Hart should be the backup goaltender 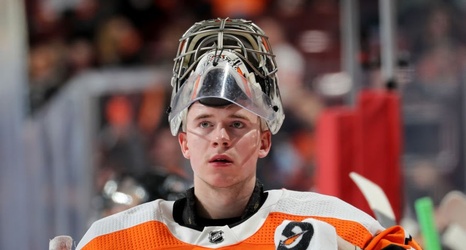 PHILADELPHIA, PENNSYLVANIA - JANUARY 28: Carter Hart #79 of the Philadelphia Flyers looks on during a stop in play in the first period against the Winnipeg Jets at Wells Fargo Center on January 28, 2019 in Philadelphia, Pennsylvania. (Photo by Elsa/Getty Images)

Carter Hart has not been good this year for the Flyers, we’re all aware of that. He’s currently 6-5-3 on the year with a .888 save percentage and a 3.61 goal against average and has already been pulled three times in only 15 stars.

His numbers are eerily similar to those put up by Mr.