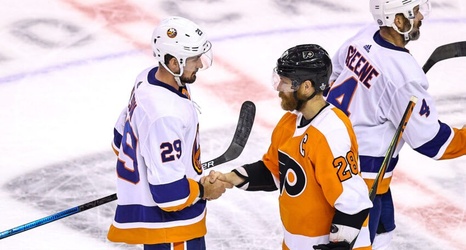 TORONTO, ONTARIO - SEPTEMBER 05: Brock Nelson #29 of the New York Islanders and Claude Giroux #28 of the Philadelphia Flyers shake hands following the Islanders 4-0 victory in Game Seven of the Eastern Conference Second Round during the 2020 NHL Stanley Cup Playoffs at Scotiabank Arena on September 05, 2020 in Toronto, Ontario. (Photo by Elsa/Getty Images)

It’s hard to believe it’s only been one year since the Flyers lost Game 7 of the Eastern Conference Semifinals to the New York Islanders. A wacky, pandemic-induced schedule can do that to fans.

On Labor Day weekend of 2020, captain Claude Giroux and the Flyers fell flat on their faces in a 4-0 loss to their division rival in their final game in the Toronto playoff bubble.