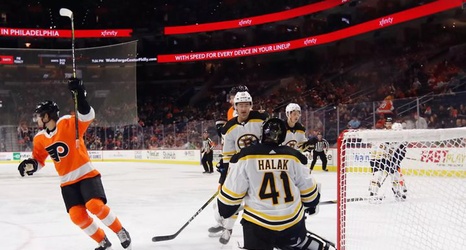 This game didn’t get off to the hottest of starts for the orange and black, as the Bruins dominated the pace early on and got the game’s opening goal. Danton Heinen (not real human) would get the first tally and give Boston the 1-0 lead. Especially shaky was goaltender Brian Elliott who... well he didn’t look good to put it nicely. His puck playing was horrendous, tracking was possibly worse which seemed impossible, and he just looked incredibly rusty.

To be fair, he wasn’t the only one. The entire team didn’t seem to have their legs under them at the start.