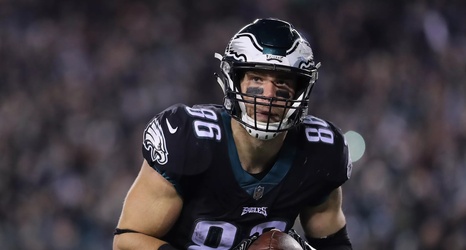 After checking in at No. 68 overall on the 2018 NFL Top 100 list, Philadelphia Eagles tight end Zach Ertz finished at No. 40 in 2019. You can [click here] to watch the video that originally aired on NFL Network.

It’s no surprise that Ertz’s placement improved coming off a year where he broke the single-season NFL record for tight end receptions with 116. Ertz’s peers clearly have a good deal of respect for him:

“Safety valve and primary, a lot of times.”

“I think he’s just like a quarterback’s best friend.