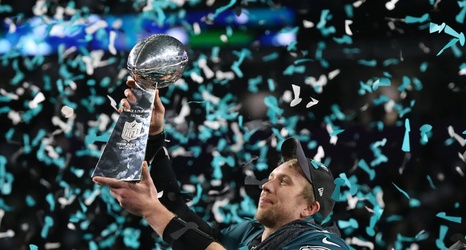 It was a long time coming, but the Carson Wentz banner that has graced the south side of Lincoln Financial Field is down. What has replaced it is one representing the Eagles’ triumph in Super Bowl LII:

While it’s paying tribute to the entire Super Bowl squad, a victory that was a total team effort, Eagles fans are not stupid. Those hands hoisting the Lombardi Trophy belong to a special someone: Nicholas Edward Foles.

Now, I don’t believe this is some conspiracy that the Eagles are doing this at a diss to Wentz, who was never able to live down playing in Nick Foles’ shadow.