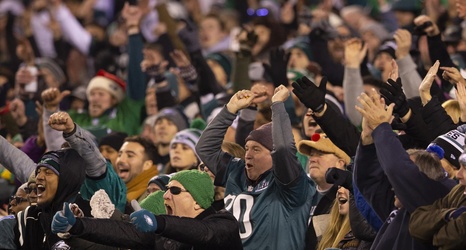 Philadelphia sports fans, Eagles fans in particular, get a bad rap. They’re characterized as drunken, angry, aggressive freaks. Some truth is in that certainly. While it’s annoying for every national TV broadcast to bring up Santa Claus and snowballs, there is a sense of pride in being the most wild people in the world.

Given that, imagine the confusion I felt when seeing a study from Lines about what fans consume the most booze and marijuana on game day (hat tip to Falcons SB Nation site The Falcoholic for finding this).

In polling fans across the NFL, Eagles fans responded that 66 percent of them drink and 56 percent smoke pot during games.