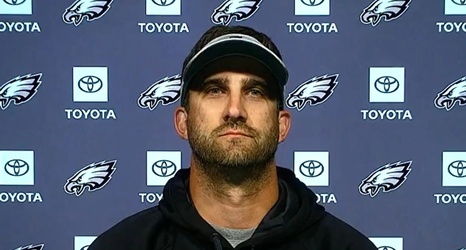 Nick Sirianni met with reporters on Monday afternoon to talk about the team in the aftermath of their Week 5 win over the Carolina Panthers.

Here’s what the head coach had to say:

It was pointed out that Sirianni was wearing Johnson’s number on his visor on Sunday, and the head coach was asked whether that was indicative that the veteran would miss considerable time. He noted that he just wanted the guys — Brandon Graham, Isaac Seumalo, and Johnson — to know that they were a part of the team effort and were there with them in spirit.