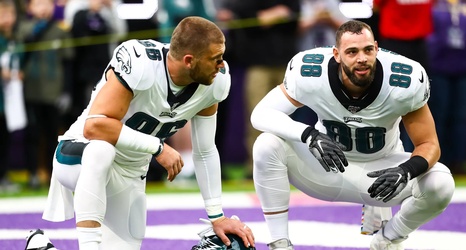 The NFL trade deadline is just over two weeks away, and Jay Glazer reported pre-game on Thursday that the Eagles may move one of their tight ends, either Zach Ertz or Dallas Goedert, sometime in the next week.

“Several teams around the NFL have been calling the Eagles this week about trading for one of their tight ends, Zach Ertz or Dallas Goedert. I wouldn’t be surprised if one of them got traded sometime this week.”

Ertz has been linked to more than enough trade rumors throughout the offseason, but when he reported for training camp and was on the roster in Week 1, speculation dwindled a bit that he would be on his way out of Philly.