Is it time for the Eagles need to invest in a third tight end? 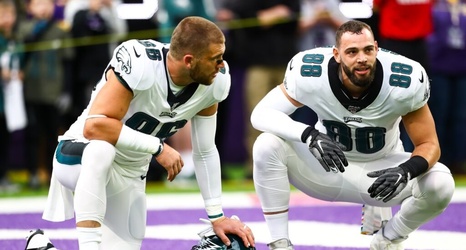 It’s been a rollercoaster era for Doug Pederson. From Super Bowl highs and three playoff appearances in a row, to anonymous sources and Orlando Scandrick, Eagles fans have quite literally seen it all. A lot has changed since Pederson first took the coaching reins in 2016, and perhaps one of the more underlying switch-ups has been at the Tight End position.

It became clear early on that having three tight ends around worked wonders for Pederson, who wanted to use the ground game to take the weight off of his rookie quarterback.