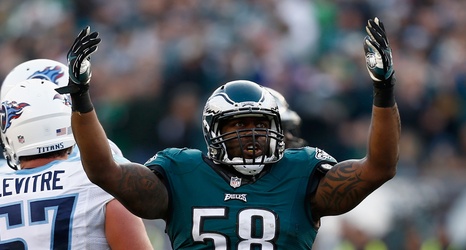 The Philadelphia Eagles have a ton of things planned for this week’s game. They announced yesterday that the team intends on doing their signature ‘blackout’, rocking the all-black uniform combination. Now, the Eagles will have former outside linebacker Trent Cole as an honorary captain.

As if having the hunter back on the field this Monday wasn’t cool enough, he is planning on officially retiring. As a Philadelphia Eagle of course! Cole was drafted by the Eagles in 2005 in the fifth round out of Cincinnati. He spent all but one season in Philadelphia and he intends on being an Eagle forever as he officially hangs it up on Christmas night.