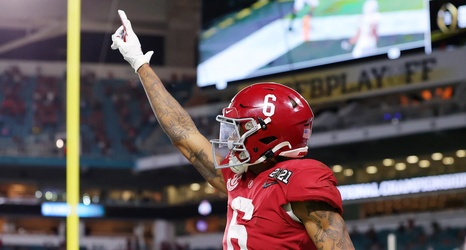 Projecting the 2021 NFL draft’s top wide receivers: Why DeVonta Smith stands alone - ESPN+
Smith has a monster projection that leaves everyone else in this draft class in the dust. Smith’s projection is all the more impressive considering that he gets a significant penalty for entering the draft as a senior. Smith is by far Playmaker’s highest projected senior wide receiver ever, and it is not even close. That spot had previously belonged to former Buffalo Bills wide receiver Lee Evans, whose projection was more than 100 yards/season lower than Smith’s. Why is Smith’s projection so high?