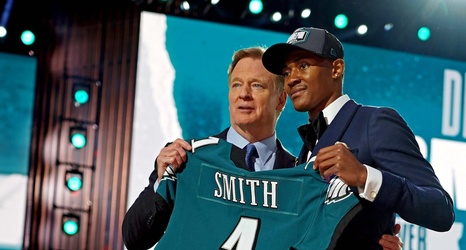 The 14 NFL Rookies With the Most Fantasy Football Potential in 2021 - The Ringer
5. WR DeVonta Smith, Eagles: The concerns about the Heisman Trophy winner’s size are legitimate, but they won’t matter too much if Smith can get open consistently. Smith will benefit greatly from motion looks and lining up off the line of scrimmage to avoid getting pressed out of plays in year one, and I’m confident he’ll find his way into fringe WR3/flex territory by midseason, which makes him a viable eighth- or ninth-round fantasy pick in 12-team PPR leagues. There’s some boom-or-bust fantasy potential here, especially with an unproven, mobile quarterback in Smith’s college teammate Jalen Hurts, but I’m betting on a top-35 fantasy finish for the former Crimson Tide receiver.