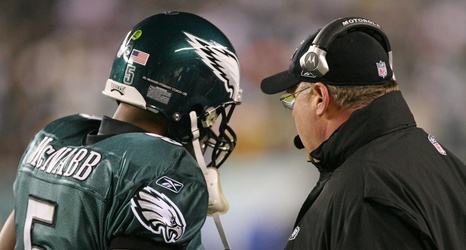 Andy Reid: Donovan McNabb belongs in the Hall of Fame - PFT
“Listen, I’m his biggest fan. I was there. I know he belongs there,” Reid said. “You talk about the great players in the National Football League? Five championship games, a Super Bowl? All those things? Good football player. Great football player, and did some things that weren’t being done at that particular time in a lot of areas. I think the world of him.”

Eagles Training Camp Practice Notes: The big man makes some big plays - BGN
If you’ve been keeping up with BGN’s practice notes, you’ll recall that a wide receiver by the name of Carlton Agudosi has been making some highlight plays throughout the offseason.