A World Champions Eagles mural is finishing up in Center City. Are others to come? 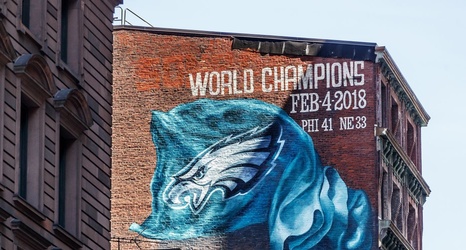 Next time you find yourself in Center City, look up. There's a brand new reminder of Philadelphia's first-ever Super Bowl win that happens to coincide with the start of football season.

Meg Saligman — a lifelong Eagles fan — is the artist whose Bella Vista studio launched a crowdfunding campaign to turn a 25-square-foot mural of an eagle gripping the New England Patriots quarterback Tom Brady into a permanent, larger-than-life version. Her team is now putting the finishing touches on a commemorative "World Champions" mural that shows an Eagle gripping the Lombardi Trophy in its talons and a midnight green flag billowing behind.