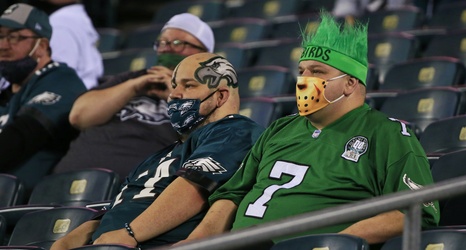 PHILADELPHIA, PA - OCTOBER 22: Boston Scott #35 of the Philadelphia Eagles rushes for yards between Blake Martinez #54 (L) of the New York Giants and teammate Kyler Fackrell #51 during the second quarter at Lincoln Financial Field on October 22, 2020 in Philadelphia, Pennsylvania. The Eagles defeated the Giants 22-21. (Photo by Corey Perrine/Getty Images)

The Philadelphia Eagles’ fanbase has some major questions about this team.

As the Philadelphia Eagles move past one divisional matchup, they prepare to host another in Week 8, the Dallas Cowboys. It bears repeating that this isn’t the way that Eagles fans thought this season would unfold.