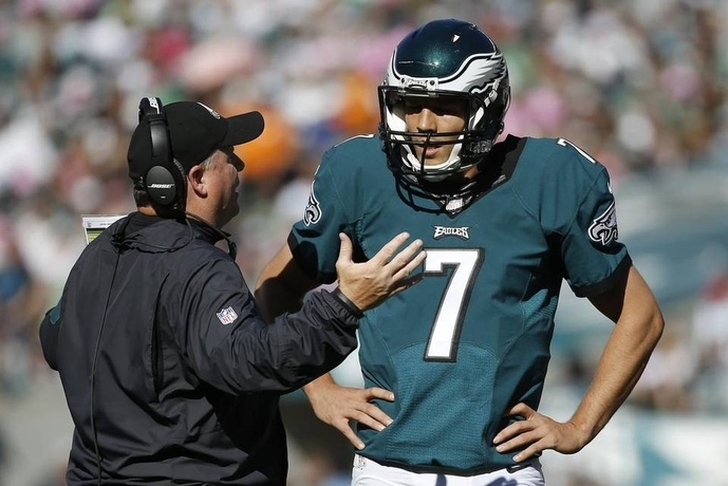 Following Sunday's victory against the Patriots, the Eagles should be feeling pretty good. Beating the reigning champions on the road after losing two straight games by more than twenty-five points gives the Eagles the confidence they need to make a playoff run this deep into the season. As of now the Eagles are in a three-way tie for first place in the NFC East, commonly known as the "NFC Least" due to lack of wins. The Eagles, Giants, and Redskins are all tied with a 5-7 record, while the Cowboys are only one game back at 4-8. The division is truly wide open, and the winner will host a playoff game. Yes, the division is horrendous, but someone has to win. Here are my predictions on the Eagles last four games, with my NFC East winner as well.

Week 14: Bills at Eagles
In LeSean McCoy's long awaited return to Philadelphia, many fans will boo the franchise's all time leading rusher after he made many remarks about Chip Kelly's apparent racist actions. With the season on the line, this game will show us who the real 2015 Eagles are. With a strong pass rush and an efficient offense, the Eagles should spoil Shady's return to Philly.

Week 15: Cardinals at Eagles
The Cardinals, 10-2, are one of football's most complete teams. They have a dominating offense lead by Patrick Peterson and Tyrann Mathieu along with an offense consisting of John Brown and Carson Palmer. Although the Cardinals are down to their third string running back David Johnson, the Cardinals should win this game solely based off of the talent they have on their football team.

Week 16: Redskins at Eagles
They Eagles simply will not let the Redskins spoil their postseason hopes again like last year, especially now that Mark Sanchez is not starting, barring any injuries. The Eagles, who lost to the Redskins earlier this year, have shown what they can do in the victories over the Patriots and Cowboys, but have proven otherwise in the losses against the Lions and Buccaneers. There is too much on the line for the Eagles to lose at home against the Redskins.

Week 17: Eagles at Giants
In what may very well determine the winner of the division, the Eagles travel to New York to play a Giants team they beat 27-7 earlier this year. They have shown that they can rush Eli Manning and make him force turnovers. In the past, the Eagles have never failed to step up against a division rival like the Giants, ultimately leading to the prediction that the Eagles beat the Giants in a shootout and win the division at 8-8.