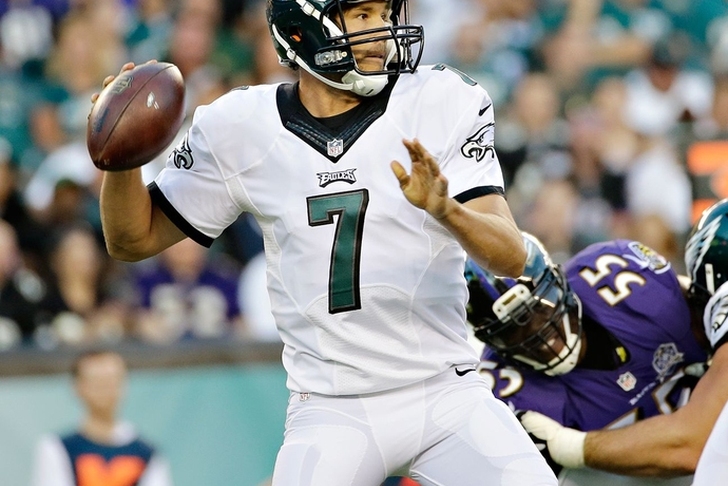 With the preseason half way done, there are many roster spots up for grabs. Following the Eagles 40-17 win against  the Ravens, players like Kenjon Barner and Bryan Braman made big cases for a spot on the team.  Although the deadline for teams to finalize their roster isn't until September 5th, here is my 53-man roster projection.

With Bradford and Sanchez locks, the only question here is Tebow over Barkley.  Although both have struggled during the preseason, Barkley has not shown any improvement since being drafted, and is still a turnover machine. Tim Tebow has shown he can run the ball effectively and has not commited a turnover yet.

Arguably the best backfield in the league, the Eagles have alot of talent with little space.  With the first three backs locked in the roster, Raheem Mostert, Kenjon Barner, and Kevin Monangai are fighting for the last spot, if there is one.  Barner was impressive with two return touchdowns.  Chip has said multiple times, if you're not a top guy, you make the team because of special teams; leading to think Barner will make the team, leaving the other two likely practice squad candidates.

Ajirotuto makes the team due to his ability to make plays in special teams, while the other five are on the team without a doubt.  Rasheed Bailey is likely on the practice squad, unless another team decides to steal him.  G.J. Kinne, the quarterback turned receiver does not make the team, because he is simply not good enough.

Tolminson showed a glimpse of potential in the preseason so far, and will likely fill James Casey's role last year.  Trey Burton has impressed all through camp, and is important for special teams as well.

After Chip decided to try out a bunch of undrafted rookies, most of them did not play, which assumes they don't make the roster.  Moffitt, Vandervelde, and Tobin all make the roster after showing potential.

Although Bradnon Bair had a solid preseason, there are simpl not enough spots for him. Taylor Hart and Beau Allen, both young players, should see more time on the field this year,

Braman impressed during preseason with a huge sack and forced fumble against the colts and alot of special teams tackles.  Marcus Smith has improved this offeason, and will make the team even though he is injured.

Chip said Kendricks isn't going anywhere, likely the same for Alonso and Ryans. Brad Jones has been has been looking good in preaseason along with Hicks. They will both provide good depth and likely contribute in special teams.

Jenkins and Thurmond are the obvious starters, with Maragos an amazing special teams player.  Reynolds had a great game against the Colts with two interceptions, and with the injury/release of Earl Wolff, he should make the team.

Watkins has been getting alot of the first team snaps as the nickle due to JaCorey Shepherd's injury.  Expect him to see alot of playing time.

No changes here as everyone still looks solid.