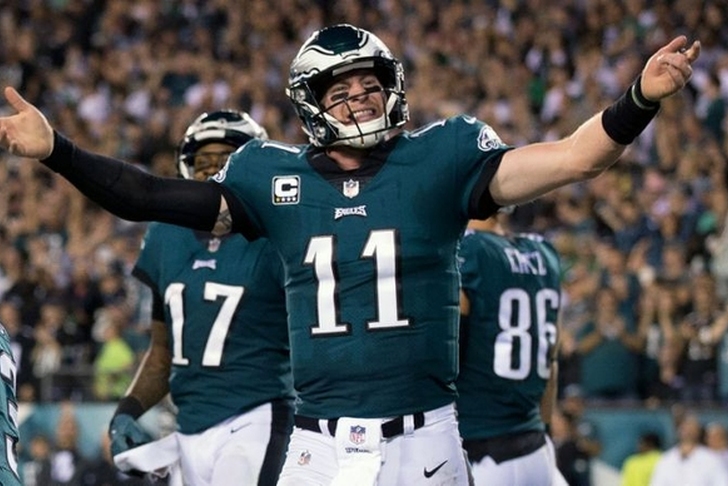 The 2018 NFL schedule won't be released for several more months, but the Philadelphia Eagles already know their opponents for next season. The Eagles are coming off their first Super Bowl in franchise history and the hype will continue to grow as the future looks bright for Philadelphia. The Eagles dealt with adversity all season and were doubted the whole way - but the underdogs prevailed. They won't be underdogs anymore, and once quarterback Carson Wentz is back at practice and ready to roll for Week 1, the Philadelphia faithful will be ready for their season opener.

Before we get into the top five season openers, here are the teams the Eagles face at home and the on the road in 2018:

Now that we know the Eagles home and away games, here are the top five best potential season openers for the Eagles.

5. New York Giants
The Giants had a rough season in 2017 winning only three games, but an NFC East rivalry in Week 1 would be a great way to start the season.  Last season the Eagles were 2-0 against the Giants, but the games were close and exciting. Philadelphia defeated New York 27-24 in Week 3 and 34-29 in Week 15. The Giants have a new head coach and with a healthy Odell Beckham Jr., it will be a great matchup and test for the Eagles to start the season.

4. Atlanta Falcons
The Falcons finished with 10 wins in 2017 making the playoffs for the second straight year, but lost 15-10 to the Eagles in the Divisional Round. The Eagles vs. Falcons will be held at Lincoln Financial Field and the Eagles would benefit against a strong Falcons team at home. This will be the second year for the Falcons under offensive coordinator Steve Sarkisian, and anytime your defense gets a tough test against quarterback Matt Ryan and wide receiver Julio Jones it's a good measuring scale on how legit the defense is.

3. Carolina Panthers
Carolina had a solid season winning 11 games finishing second in the AFC South in 2017. The Panthers traveling to Philadelphia is a matchup that favors the Eagles because Carolina struggles on the road. Carolina lost five games last season and three of them came on the road. The Panthers will look to avenge their 28-23 loss to the defending Super Bowl champs in Week 6, but the Eagles will keep pounding the Panthers in 2018.

2. Dallas Cowboys
The Eagles were 1-1 against the Cowboys last season, but let's be honest, the Eagles 37-9 win in Week 11 is more of a reflection on the team's talent compared to the Cowboys 6-0 win over the Eagles in Week 17. The Eagles had nothing to play for in Week 17 and rested for their journey in the NFL playoffs, and it worked out very well I would say. A Week 1 battle of the last two NFC East champions would be a great way to start 2018.

1. Minnesota Vikings
The Eagles embarrassed the Vikings in the NFC championship game 38-7, dropping 38 unanswered points on their road to Super Bowl LII. The Vikings will look to redeem themselves but heading to Philadelphia may bring some bad Deja vu for the Vikings. Both teams play a tough style of football and anytime there can be a rematch of the two best teams in a division from the previous season, it's a great way to kick off 2018.