Handicapping Where Eagles HC Chip Kelly Will Coach Next Season 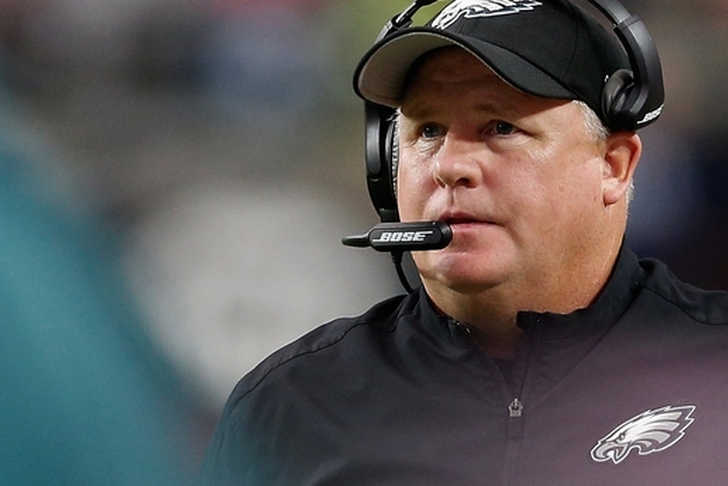 Rumors are swirling about the future of Philadelphia Eagles head coach Chip Kelly, as the former Oregon Ducks HC has been connected to seemingly every vacant (or soon-to-be-vacant) coaching job in college football. We're here to sift through the noise and break down just where Kelly could ACTUALLY land in 2016. Read more below as we start Handicapping Where Eagles HC Chip Kelly Will Coach Next Season.

Kelly is one of the only names out there who wouldn't buckle under the pressure of functioning in Steve Spurrier's shadow. If things go south in Philly, the Gamecocks could be an intriguing project for Chip -- loaded with talent, a couple years removed from a string of 11-win seasons, and guaranteed exposure thanks to playing in the SEC. This is a pure speculative placement, especially since the only college team Kelly has really been connected to is the "other USC." But, it's not out of the realm of possibility.

Per Don Markus of the Baltimore Sun, there is "a possibility that Maryland will make a run at Philadelphia Eagles coach Chip Kelly, sources said." Furthermore, Maryland president Wallace Loh name-dropped Kelly as part of his wishlist, talking about the program's "potential to be another Oregon." A move to Maryland would be odd to say the least, but the Big Ten is a much more winnable conference than the SEC from a year-to-year perspective. Kelly would also get a lifetime pass if he came to Maryland, especially since he'd cover over the stink left over from the Randy Edsall firing.

Things haven't been going well lately with Kelly and the Philadelphia Eagles, but he definitely would be welcomed back in the college football world with open arms. No other school has the widespread appeal, talent base, and recruiting prowess of USC. Kelly has denied reports that he'd be interested in the team's head coaching vacancy, but of course he's going to deny them while still entrenched in his work with the Eagles. Kelly's foray in the NFL is slowly starting to chip away at his reputation, unjustly or not. If he decides to get out while his stock is still top-college program worthy, he won't do better than USC. USC won't do much better than him either, especially in the wake of the Steve Sarkisian situation.

"I hope someday to be like Coach [Tom] Coughlin and win enough games where I can stay around long enough where that speculation ends," Kelly said. We're not inclined to listen to the grumblings starting to surface about both a) Kelly's commitment to the Eagles and b) the Eagles are writing off the Kelly Era as a mistake. The moving parts haven't quite clicked yet, but Philadelphia is still just one game behind the NY Giants in a VERY winnable NFC East. One sustained run and this team takes the division and silences the Kelly rumors -- at least for one more year.

Or...USC comes firing with everything they have and Chip Kelly can't resist, asking for his release after year three of a five-year pact.