Grading the Eagles' Loss To The Cowboys 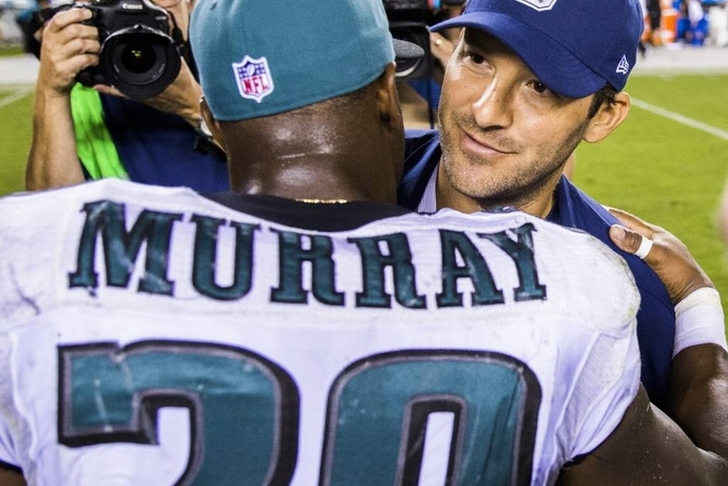 The Eagles played the worst game in Chip Kelly's three-year career last night. Although the scoreboard didn't show it, their 20-10 home loss against the Cowboys was nowhere near close. They were unable to develope a strong running game behind an offensive line that let up several negative yard rushes, and Sam Bradford failed to drive his team down the field. The Eagles could not have a worse start to the season, but the good news is that there are still fourteen more games left. Below are the Eagles grades from last night's game.

The Eagles had a combined 17 carries for only 7 yards, with Sam Bradford the leading rusher; Sam Bradford, the quarterback who barely has knees. The offensive line didn't help at all, allowing Cowboys players to get to the running back and creating no holes. To add on, Sam Bradford threw 2 interceptions, and fumbling the ball off of a snap. To be fair, one of the picks hit off the hands of Zach Ertz, but another was picked off targeting Ertz with a wide-open Josh Huff near the end zone. With only 236 total yards of offense, something has to change.

The defense played pretty well. Anytime the Eagles let up 20 points, it is expected that they will win. Byron Maxwell didn't get beat too badly, besides a late game touchdown by Terrence Williams. He forced a fumble and held his ground. The front seven was terrific, with Bennie Logan, Connor Barwin, and Fletcher Cox all playing well. Kiko Alonso and Mychal Kendricks were doing well before they both left the game early. Eagles fans should not be too worried about their defense heading into week 3.

In a game-changing play, the Cowboys blocked a Donnie Jones punt and returned it for a touchdown. It no doubt changed the game and could have been avoided. One positive note was Cody Parkey's 46-yard field goal, proving he didn't lose his leg.

The Eagles simply played awful, and should forget this game ever happened. Not one player on the offense played well except for Jordan Matthews, who had most of his yards and a touchdown in garbage time. They should focus on next week against the Jets and realize they still have a legitimate chance to win the NFC East with Tony Romo out.