Eagles Training Camp News: 3 Things To Look For This Week 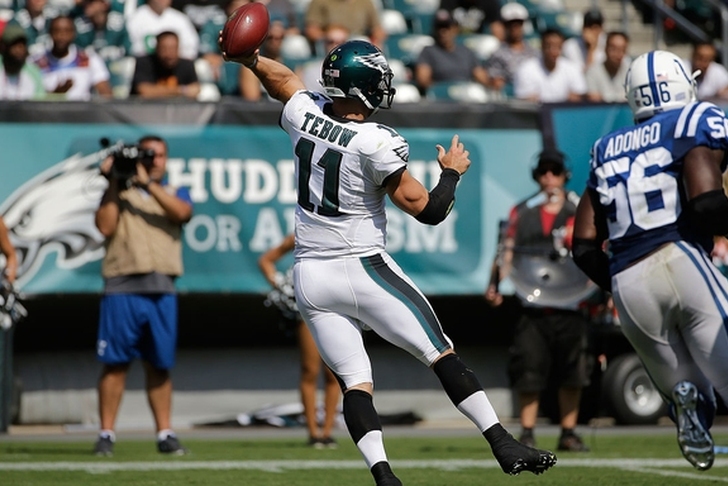 The Philadelphia Eagles narrowly missed the postseason last year, but they expect to return to the playoffs next season. We got our first look at the Eagles in their preseason opening win against the Colts, creating even more intrigue around this team. Here are three things to look for this week ahead of their next preseason game against the Ravens:

Tebow looked rusty at times in the opener - his first live NFL action in two years - but still completed six of 12 passes for 69 yards and a rushing touchdown. Head coach Chip Kelly was pleased with what he saw, but Matt Barkley, who is competing with Tebow for the third-string QB job, played extremely well. Tebow is going to need to show improvement and an increased level of comfort in the system if he wants to keep his NFL dream going.

How will Sam Bradford look in live practice?

Kelly held Bradford out of the preseason opener, which is a rightfully cautious move after Bradford tore his ACL is the preseason last year while playing with the Rams. Because of that, he's not expected to see a lot of action in the preseason, so his only to get extended live action may be this week in practices against the Ravens before their game.

How he plays in those practices will be the biggest indicator of how he'll perform during the regular season, and what Eagles fans should expect from him.

Can their young rookies continue to produce at a high level?

There’s plenty to like about the Nelson Agholor/Eric Rowe/Jordan Hicks trio in front of the draft. Both Rowe (cornerback) and Hicks (linebacker) are high upside prospects with great motors who’ll likely be impact players early, and Agholor’s work as a precision route runner and returner will have Eagles fans jumping for joy before long.

All three guys have gotten a lot of work with the first team, and we very productive in the opener - especially Agholor, who turned a simple curl route into a long touchdown). The coaching staff wants to see if all three guys can keep up this level of play.

Follow our Philadelphia Eagles team page for all the latest Eagles training camp news and rumors!