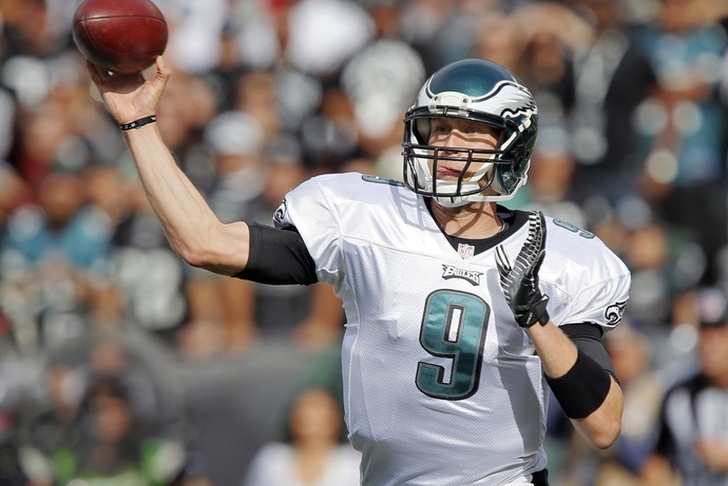 NFL free agency is well under way and the Philadelphia Eagles have found themselves at the center of several rumors. The Eagles made a few moves early in free agency, with a focus at wide receiver. With the NFL Draft coming up, the Eagles aren't done yet. Here are the latest Eagles news and rumors you need to know.

Nick Foles Contract
Nick Foles is back in Philadelphia and the contract details are now out. It's a five-year, $27.5 million deal, but it's not actually that simple.

So here's what the deal, in reality, is. It's a two-year deal worth $11 million. That's roughly the going rate for a backup QB and there are added incentives if Foles is pressed into starting duty.

Could The Eagles Make Another Splashy Draft Trade?
The Philadelphia Eagles brought in LSU RB Leonard Fournette for a visit Saturday, which would just be viewed as the team doing it's due diligence. But Mark Eckel of NJ.com floats another idea: could the Eagles and GM Howie Roseman be angling for another draft day trade?

"Maybe Howie (Roseman) has something going on again,'' a person familiar with the Eagles told NJ.com. "You never know. He likes to make a splash."

But getting Fournette wouldn't be easy. Just getting to the No. 5 pick would likely cost the Eagles their first, second and third round pick. Eckel suggests including a player or 2018 draft picks to help lessen the draft pick loss from this year's class. But with the cost required to move up, getting Fournette might be too difficult for the Eagles to pull off.

Dalvin Cook Visit
Fournette isn't the only RB the Eagles brought in for a visit.

FSU RB Dalvin Cook is in Philly for a pre-draft visit with the Eagles, source says. Possible addition after WR upgrades in free agency.

Cook should be on the board for the Eagles in Round 1. The Eagles are a logical landing spot, with a need at the position. There are some off-the-field and minor injury worries with Cook, but he's generally considered the No. 2 RB in this year's class. He's an expected first round pick.

Follow our Philadelphia Eagles team page for all the latest Eagles Rumors and news or download the Chat Sports App!