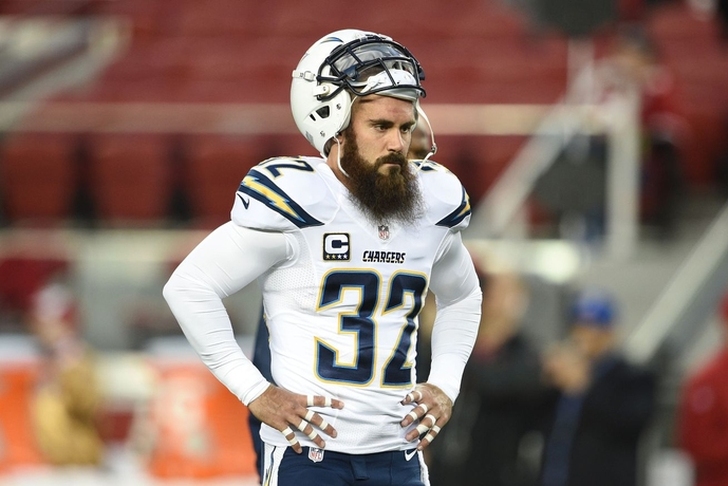 The latest Eagles free agency rumors, including a possible Byron Maxwell trade, can be found here.

The Philadelphia Eagles failed to make the playoffs last season after massive changes under Chip Kelly didn't work out. The Eagles fired Kelly, replacing him with Doug Pederson and a new front office. The Eagles have several needs to address to help them get back to the playoffs after a two-year absence, and they're looking to free agency to help them fill those needs. Here's all the latest rumors you need to know before free agency starts on March 9.

Philadelphia looking to get high-end safety
The Eagles have a good amount of cap space to work with this offseason, and they plan to use it to bring a top-tier safety. According to CBS Sports' Jason La Canfora, they're targeting Chargers safety Eric Weddle in particular.

"I continue to hear Philly, Miami, Jacksonville, Kansas City, Oakland and Washington as the teams sniffing around the high-end safety market. I would not be surprised if Eric Weddle maintains his $8 million-per-year stature on the open market, especially if he ends up signing with one of those rebuilding teams with cap space to spare."

Eagles interested in G Jeff Allen
Kansas City Chiefs guard Jeff Allen is will be a free agency, and Pederson is hoping that he will follow him to Philadelphia. Via Philly.com's Les Bowen:

"Allen is on the Eagles' radar, according to sources familiar with the Eagles' plans, but other teams want him, too, including the Chiefs, who could make a push to keep the left guard. They'll likely let him walk."

Allen was one of Kansas City's better offensive linemen last year, which would make him a steal for an Eagles team that is really looking to upgrade that unit. Jacksonville has also expressed interest in Allen, but the Eagles are considered to be the favorite to land him because of the Pederson connection.

Tahir Whitehead to sign with Eagles?
Another area that Philadelphia is looking to upgrade is their linebacking core, and they play to rely on another connection for help. Instead of Pederson, defensive coordinator Jim Schwartz is expected to bring Lions linebacker Tahir Whitehead to Philly from his time as Detroit's head coach. As NJ.com's Mark Eckel says, it just makes too much sense.

"He can play inside or outside. He knows coordinator Jim Schwartz' defense. He went to Temple. He could be an Eagle by Wednesday night."