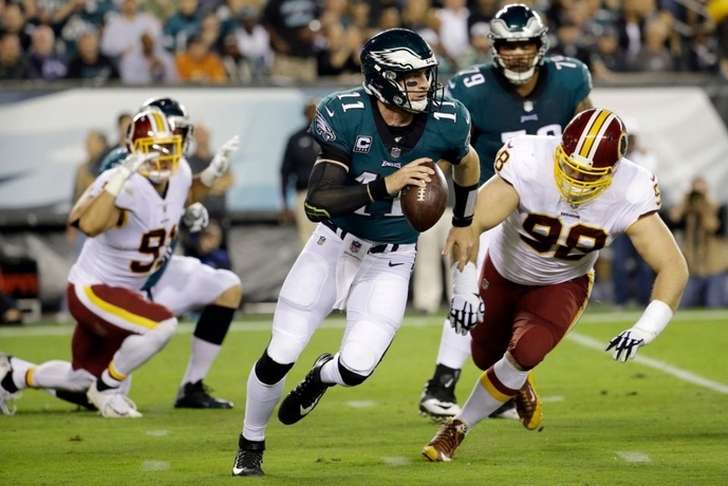 Carson Wentz threw four touchdowns as the Philadelphia Eagles scored on five of their final six drives, allowing them to cruise to a 34-24 win over the Washington Redskins on Monday Night Football.

After a slow start and facing a 10-3 deficit, Wentz and the offense caught fire thanks to this 64-yard touchdown pass to Mack Hollins.

That started an onslaught of 21 consecutive points for the Eagles that really turned this game around and turned it into a blowout.

This pass from @cj_wentz to @ZErtz_86 gives the #Eagles the lead at the half! #FlyEaglesFly #MNF #WASvsPHI pic.twitter.com/cLyxCYW8it

Wentz made his case in the MVP race with this performance tonight, throwing for 268 yards with four touchdowns while also rushing for 64 yards on just six carries. He completed passes to eight different receivers, a group that was led by tight end Zach Ertz (five catches, 89 yards, TD).

Kirk Cousins also had a great game for the Redskins, passing for 303 yards and three touchdowns, but their defense let them down and the offense as in catch-up mode throughout the second half. Tight end Jordan Reed led Washington with eight catches for 64 yards and two touchdowns.

Philadelphia moves to 6-1 with the win, giving them the best record in the NFL. They will look to keep things going next week when they host the San Francisco 49ers, while the Redskins will look to rebound at home against the Dallas Cowboys.

Follow our Philadelphia Eagles team page for all the latest Eagles news!