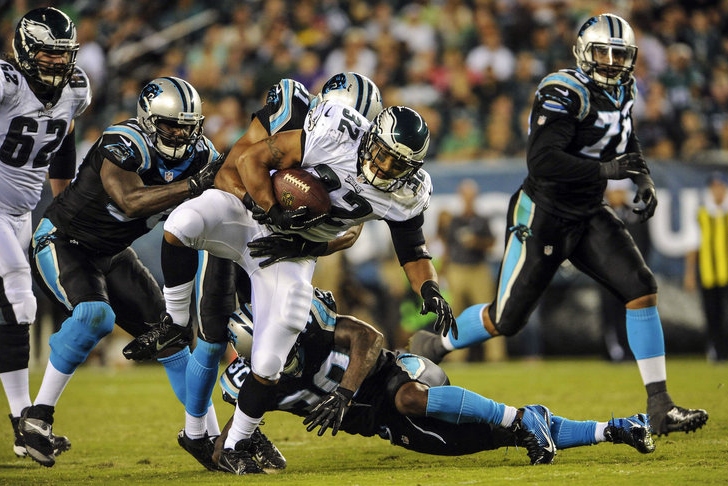 The Philadelphia Eagles take on the Carolina Panthers in our Week 10 Monday Night Football matchup...who has the edge?

The Panthers weren't an elite offense last season, but they've still found a way to regress in 2013 despite the addition of rookie standout WR Kelvin Benjamin. Carolina's struggles in the run game (they're currently 26th out of 32 NFL teams in rushing yards per contest) make it difficult for Cam Newton to keep defenses honest, and Newton himself has looked like the team's most dangerous threat on the ground.

Philadelphia, meanwhile, has a top-5 passing offense and a top-10 rushing offense, but they'll be without starting QB Nick Foles (broken collarbone). Backup Mark Sanchez doesn't inspire much confidence on his own, but he still has LeSean McCoy, Darren Sproles, Jeremy Maclin and a variety of other weapons at his disposal.

While the offense in Carolina isn't as good as it was last year, the regression on defense has been the real reason they're 3-5-1. While the Panthers are still solid against the pass (Luke Kuechly continues to be a monster in coverage), Carolina is giving up 131.9 yards per game on the ground...against a rushing attack like Philadelphia's, that doesn't bode well.

The Eagles had one exceptional defensive performance this season (their shutout win over the Giants in Week 6), but they've otherwise relied on their offense to outscore the opposition. The secondary in Philadelphia is far from convincing, and Cam Newton will be able to do some damage if he gets into a rhythm.

Neither squad has a real edge in the kicking game - both Philadelphia's Cody Parkey and Carolina's Graham Gano have been among the league's best kickers so far, and both teams are very close in punting and coverage as well.

While it's still too early in Chip Kelly's career to get a full read on him as an NFL coach, the early returns are very promising. Ron Rivera, now in his fourth year with the Panthers, has proven to be an excellent defensive coach liable to make questionable decisions on offense. Neither coach has done anything to pull himself ahead of the competition here.

The Eagles haven't had a very tough schedule so far this year, and they still haven't convinced us they're as good as their record...and the Panthers have faced one of the most brutal slates in the league, making us think they're better than the 3-5-1 record shows. This one is going to be close, but we see Philadelphia's home-field advantage making the difference as the Eagles win 27-24.