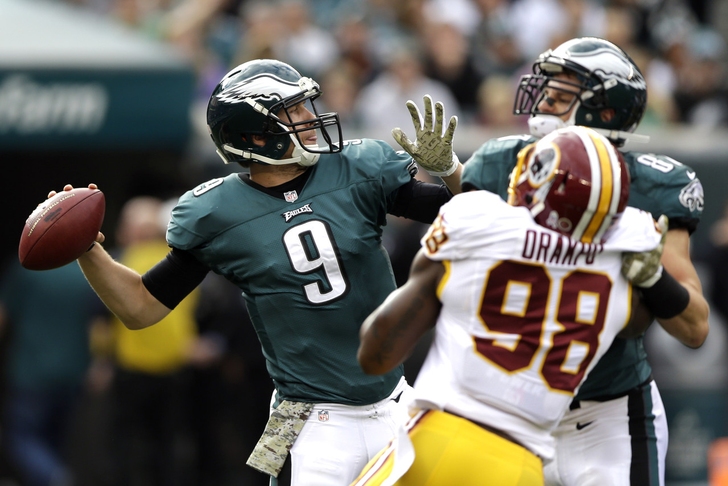 In an absolute shootout the Philadelphia Eagles were able to outlast the Washington Redskins with a final score of 37 to 34. Even with Lesean McCoy only accounting for 22 yards from scrimmage.

5. Kirk Cousins could be better fit in Jay Gruden's offense than RGIII.

Cousins threw for a very impressive 427 yards with 3 touchdowns and 1 interception. Even though the performance resulted in a loss, Cousins showed once again that he is capable of filling in for Robert Griffin III. The Redskins will need to make a decision when Griffin III is able to return.

Throughout the game there were some cheap shots taken, it began in the first quarter when Desean Jackson made a reception. He was already down and an Eagles defender came and delivered a quick elbow to the helmet. There was no penalty called for that hit but once Jackson got up and reacted a penalty was called on the Eagles defense. The worse of the two was on a late block on an unsuspecting Nick Foles by Sam Baker which led to a big scrum on the sideline and ejections from both sides. These two teams meet one more time this season in Washington, I already have it marked on the calendar.

These two teams were constantly moving up and down the field at free will and put up a combined 890 total yards. The Redskins were responsible for 511 of those yards with the Eagles putting up 379. It's no secret that the Eagles offense is dangerous but today the Redskins were able to move the ball very successfully. It makes you beg the question, is it a case of great offense or poor defenses? We think the latter.

Second year head Coach Chip Kelly has imported his high-tempo spread offense into the NFL and is having great success. With the Eagles being 3-0 they now have a one game lead over the second place Cowboys and two games over the Giants and Redskins who are sitting at 1-2. The Eagles head to San Francisco next week to play the Niners in a tough matchup followed by two winnable games against the Rams and Giants, both in Philadelphia. If they lose only one of those they will go into their week 7 bye at 6-1, something that could very likely happen.

1. Philadelphia has no quit in them.

The Eagles became the first team in NFL history to come back and win after trailing by ten or more points in three consecutive games. In a game that looked as if the Redskins were going to control early, the Eagles and Nick Foles kept their composure and came from behind like they have all season long. The resiliency of the Eagles already shown early in the season will only improve their confidence for the rest of the year. As long as there is time on the clock, the Eagles will feel like they are still in the game.