Eagles Rumors: Franchise Ready To Move On From Nick Foles At QB 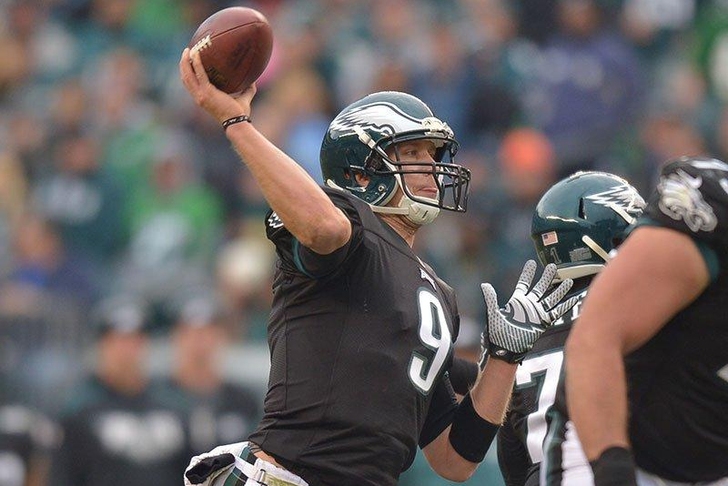 According to a report on NJ.com, the Philadelphia Eagles have serious doubts about Nick Foles' future with the franchise, and the issue was present even before Foles broke his collarbone against the Houston Texans.

The report cites sources within the Eagles organization, and says many in the Eagles front office (including GM Howie Roseman) have "soured" on Foles after his inconsistent start to the 2014 season. According to the report, Roseman preferred Kirk Cousins over Foles in the 2012 draft, but was overruled by head coach Andy Reid and offensive coordinator Marty Mornhinweg. Both Reid and Mornhinweg are no longer with the franchise.

Foles was a Pro Bowler in 2013 after taking over the starting job in week 5, then throwing 27 touchdowns with just two interceptions on the year. In 2014, Foles has thrown 13 touchdowns and 10 interceptions in 8 games. His completion percentage is down from 64% to 59%, and his QB rating has decreased from 119.2 to 81.5.

Foles won't need surgery on his fractured collarbone, but is still out indefinitely and could miss the remainder of the season. Mark Sanchez took over for Foles against the Texans, passing for two touchdowns and two interceptions as the Eagles won 31-21 and improved to 6-2 on the year.

Since Foles is on a rookie contract and is due to make $620,000 next year, moving on won't be expensive for the Eagles. A contract extension was unlikely before Foles' injury, and now appears to be off the table entirely.

Sanchez is not expected to claim the starting job on a permanent basis, and the Eagles could look to a trade or next year's draft for a new QB. Florida State's Jameis Winston and Oregon's Marcus Mariota are the two most well-known QB prospects, but Michigan State's Connor Cook and UCLA's Brett Hundley are fringe first-rounders as well. Considering Eagles HC Chip Kelly was the one who brought Mariota to Oregon, though, he'll be the name to watch if Philadelphia decides to go that route.