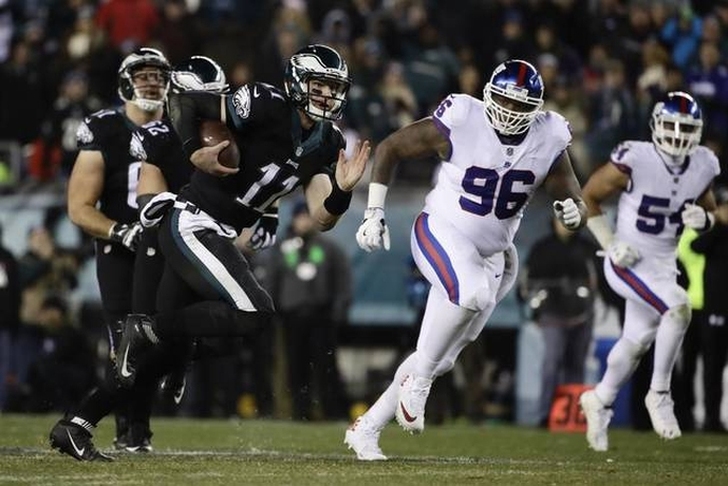 The Philadelphia Eagles suffered their first defeat of the season last weekend in a 27-20 loss to the Chiefs but get the chance to right the ship in their first home game of the season on Sunday against the New York Giants. New York has not won a game this season - and I expect that to continue. Here are three reasons why the Eagles are guaranteed to win on Sunday:

1) Carson Wentz's breakout season
Wentz fizzled down the stretch last season after an impressive start, and the improvements he made this offseason have been blatantly obvious. He's more in command of his offense and has more confidence in his receivers, and the result has been 640 yards and four touchdowns in the first two games. Wentz has been more precise in his progressions and making the right play - but he can also do stuff like this:

His full array of skills has been on display this season. And, with New York's depleted secondary, he should have another great game.

2) New York's terrible offensive line
This group has been absolutely atrocious through two games this season. Quarterback Eli Manning has been sacked eight times - on 10.3 percent of his dropbacks - and suffered 12 quarterback hits, showing the unit's inability to keep the quarterback clean. They also don't open running lanes as New York ranks last in rushing at 48.5 yards per game.

Guess what? Things aren't going to get easier against the Eagles.

Philadelphia's front seven has been dominant, recording seven sacks, nine tackles for loss and eight hurries while forcing two fumbles. They're going to wreak havoc in this game.

3) Eagles have New York's number
Whether it's scheme fit or bad matchups or what have you, for some reason, there are teams that just have another team's number. That's the case with these two teams as the Eagles have won five of the last six meetings between the two. Furthermore, that one loss came when Wentz threw two near pick-sixes (and Philly almost pulled off the comeback). Expect that domination to continue, especially given the way the Giants have been playing of late.

Follow our Philadelphia Eagles team page for all the latest Eagles news!