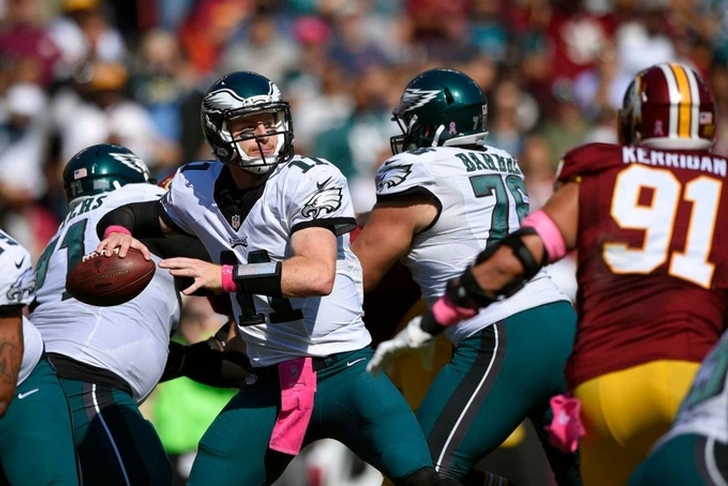 The Philadelphia Eagles need to essentially win the rest of their games to have any realistic shot at making the playoffs, and they're hoping to get that streak started on Sunday against the Washington Redskins. Even though the Redskins are favored, we know better. Here are three reasons why the Eagles are guaranteed to win this weekend:

3) Redskins road woes
Since Kirk Cousins took over as the starting quarterback in 2015, Washington is a well below average 5-8 on the road, with him throwing 12 interceptions in those 13 games. For whatever reasons, this team really struggles when they're not at FedEx Field, and fail to bring their best game with them on the road. Safe to say, they'll likely struggle again on Sunday.

2) Washington's defensive struggles
The Redskins defense has been shaky this season, mostly because they particularly struggle in key situations. They allow opponents to convert 48 percent of their third downs, which is the most in the league. Washington also ranks 30th in red zone defense and have caused just 14 turnovers. Simply put, the opportunity is there for Philadelphia's offense to have a big game.

1) Carson Wentz's rebound game
All of that points to the Eagles' offense being able to have a rebound game, setting things up perfectly for Carson Wentz. Yes, he has struggled later this season after his hot start (as to be expected with any rookie), but those struggles aren't as bad as everyone is making them out to be. Philadelphia's receiving core has dropped more passes than anyone else this season, yet Wentz is has still completed at least 60 percent of his passes in three of the last four games. He'll be able to exploit those holes in Washington's defense.