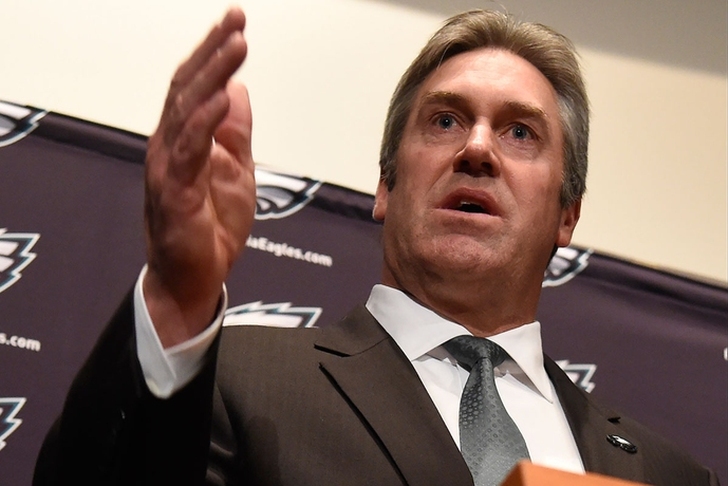 The Philadelphia Eagles had a large list of head coaching candidates to work with after firing Chip Kelly, but they ultimately decided to settle on the "safe" option -- a move that could come back to bite them BIG TIME. Here is 3 Reasons Why Doug Pederson Is An AWFUL Coaching Hire For The Eagles.

3. Playing The Opposite Game
If the Eagles strike it rich here, they'll find the next Andy Reid. If they don't, they may have stumbled upon the next Jim Tomsula -- an overmatched hire who serves as a palate cleanser after a messy breakup with a hard-headed, control freak coach (Chip Kelly, Jim Harbaugh). Just because Pederson is Kelly's opposite in several key interpersonal areas doesn't mean he's an NFL-ready head coach.

It's a gamble, and one that could lead the Eagles to scramble next offseason if the losses pile up in 2016.

2. Lack Of Experience
Pederson has just three years of experience as an NFL coordinator -- all of those as an OC under a head coach (Andy Reid) who dominates the conversation when it comes to offensive game planning. Owner Jeffrey Lurie has celebrated Pederson for an "emotional intelligence" that Chip Kelly lacked in his dealing with the Eagles, and Pederson does experience in the organization as a player and coach under Reid.

However, his only head coaching experience was a four-year stint at Calvary Baptist Academy -- not exactly a job which screams NFL READY.

1. Too Much Of A Yes Man
Some coaches are born leaders. Others have such an even temperment that they fade into the background and let others take the reins.

According to The Inquirer's Jeff McLane, Pederson's unassuming personality may be a sign of a corporate yes man -- someone who might not be able to command respect or incite passion in the locker room:

"He won't come in and rock the boat. Coaches who say "gosh," as Pederson did on Wednesday when asked about his meeting with the Eagles, aren't boat rockers. As silly as it seems, Pederson's aw-shucks answer almost sounded like a "Muskie Moment."

"Does a leader of men, someone that will have to endure one of the toughest towns in which to coach football, say "gosh?"'