3 Reasons Why Carson Wentz Will Thrive With The Philadelphia Eagles 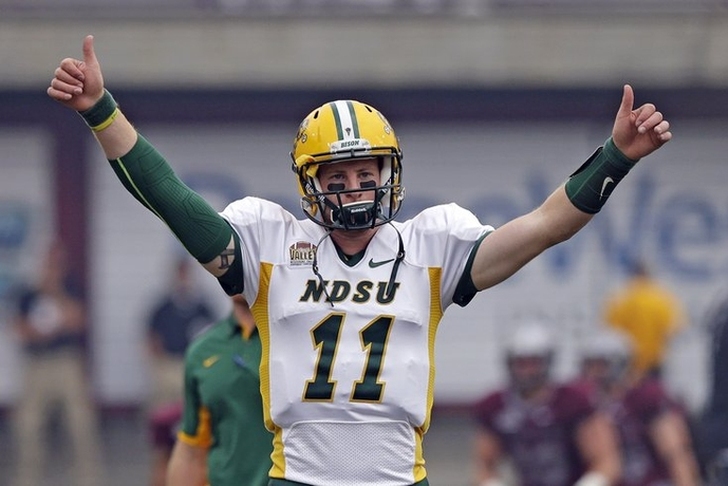 The Philadelphia Eagles traded up to draft Carson Wentz with the No. 2 overall pick in the draft, hoping he can become the future face of this franchise. However, with the Sam Bradford situation up in the air, Wentz might see time sooner rather than later. Here are three reasons why he will thrive with the Eagles:

3) Time to learn
No matter what happens with Bradford, Philadelphia doesn't plan on starting Wentz right away, and that's a good thing. Even the most NFL-ready college quarterbacks need time to adjust to the speed and physicality at the professional level, and giving Wentz the opportunity to do so without putting a lot of pressure on him will only quicken his development.

However, there is something to be said for getting your nose bloodied on the field. Expect Wentz to sit for at least the first half of the season, but then start to see time during the second half - and expect him to be successful because of it.

2) Size, mobility and arm talent
It's easy to see why Philadelphia became obsessed with Wentz when going through the draft evaluation process. At 6'5" and 232 lbs, he has the prototypical size you look for, and his mobility makes him scary for opposing defenses. His combine stats were comparable to Andrew Luck's, and he had six rushing touchdowns each of his last two years at North Dakota State.

However, he mostly uses that mobility to escape the rush in the pocket while keeping his eyes down field. In other words, he runs to throw - he doesn't run to run out of panic. Add in his elite arm talent that gives him the ability to make every throw, and this is a guy who has all of the tools to be a future superstar.

1) Doug Pederson's offense
Where a player gets drafted is as important to their future success as the player's actual ability, and there's no better place Wentz could have landed. Pederson saved Alex Smith's career in Kansas City by designing an offense that made the most out of his mobility and employed simple reads in the passing game. Making the game simply will benefit Wentz, and his ability to drive the ball down the field will add an entirely new dimension to what has a limited offense in KC. Pederson is known as a QB guru for a reason.