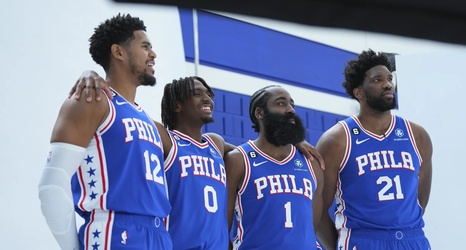 Today’s Out of Site Podcast on the Liberty Ballers Podcast Network is all about the media!(It’s not in the way you may be thinking, however.)

Monday was Media Day for the Philadelphia 76ers at the Camden, New Jersey practice facility. It was the first time all of the Sixers were in the same place since the addition after addition during the off-season.

All of the major players were there: Joel Embiid, James Harden, Tyrese Maxey. They were joined by new Sixers P.J. Tucker, De’Anthony Melton and Danuel House. All of Sixers media were in attendance to get a sense of how the team is feeling going into this season with all of the new additions and (according to Joel Embiid) the loss of a large weight of drama.