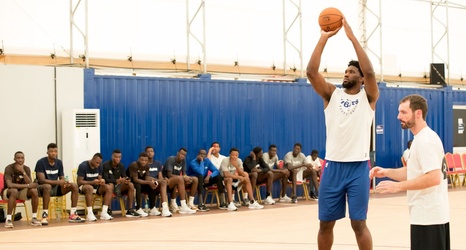 Since training camp has started, we’ve heard all about the concerns of the lack of shooting on the Philadelphia 76ers. J.J. Redick is gone and Joel Embiid let us know how much he’ll miss Redick’s contributions. Redick’s absence makes the 3s Embiid does take more important. Embiid’s improvement on 3-point shooting is not a main priority, but it will need to happen for the offense’s

Suggesting Embiid improve on his 3-point shooting may garner an eye roll because one, in turn, would think that he’ll increase his attempts to do so. No way I would suggest an attempt increase due to Embiid’s notable dislike for hoisting up the trey-ball.