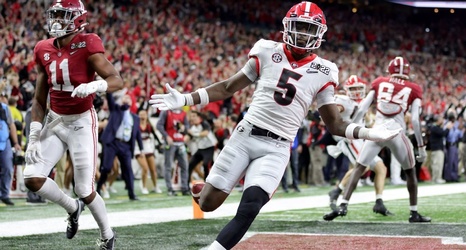 INDIANAPOLIS - Georgia's 41-year wait is over.

With 54 seconds left in in the College Football Playoff National Championship Game Presented by AT&T, Georgia corner Kelee Ringo intercepted Heisman Trophy winner Bryce Young and returned it 79 yards for a touchdown -- the longest pick-six in championship game history -- cementing the Bulldogs' 33-18 win and the program's first national championship since 1980.

As the clock expired, the Georgia assistant coaches bolted to the elevators in the shaking press box at Lucas Oil Stadium, with one yelling, "hell yeah!" as they thundered out cheering together.

While it was a familiar matchup featuring two teams that faced each other in the 2018 national title game and again in this year's SEC championship - both Alabama wins - it was a wildly different outcome before an announced crowd of 68,311 in Lucas Oil Stadium.