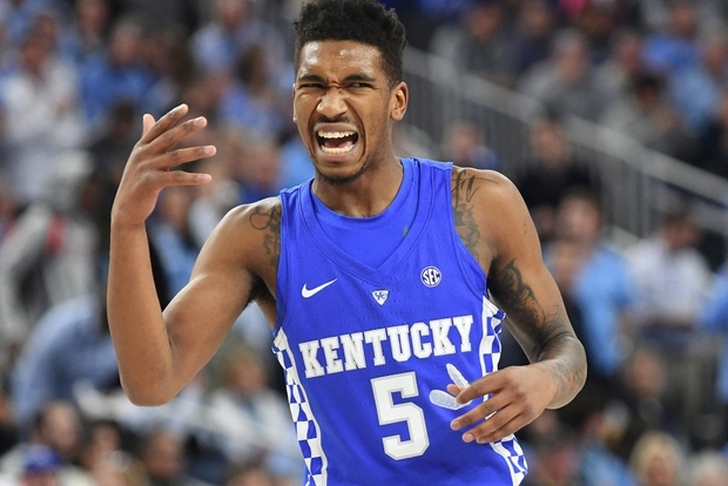 The Philadelphia 76ers are looking to upgrade their backcourt in the NBA Draft and have expressed interest in Kentucky's Malik Monk, but drafting him with the No. 3 overall pick would be a reach for him.

As such, there has been talk about them trading the pick to the Kings for the No. 5 and No. 10 picks in the first round, allowing the Kings to get their top target in De'Aaron Fox while still giving Philadelphia the opportunity to select Monk.

So, why hasn't that deal happened yet? The two sides have talked about a deal along these lines, but it's unlikely for anything tangible to happen until draft day for a variety of reasons.

First off, the 76ers are waiting to see what the Lakers do with the No. 2 pick. Los Angeles is reportedly split on Josh Jackson and Lonzo Ball with that selection, and if they take Jackson (or Fox, who works out for the 76ers on Saturday), Philadelphia would be expected to take Ball, who they view as a future superstar.

Jackson reportedly received a promise from either the Lakers for 76ers, but I am told that is not the case. Monk is scheduled to workout for the Sixers on Thursday, and if he performs well, that could also get the wheels turning quicker on this potential trade.

Philadelphia plans to experiment with moving Ben Simmons to point guard this season, which would help neutralize Monk's lack of height - at 6-foot-3, he's extremely small for a shooting guard. Monk would also give the Sixers needed three-point shooting help. They ranked 23rd in the NBA from beyond the arc this past season, and didn't have anyone in their rotation shoot over 36.8 percent from deep.

Follow our Philadelphia 76ers team page for all the latest 76ers draft rumors!